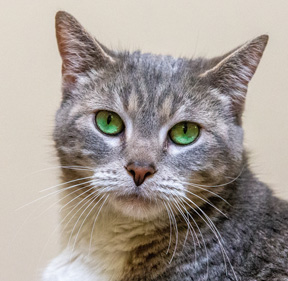 Mr. Griz came to MEOW after being a Calgary neighbourhood stray for a few weeks and flagged as a possible pregnant cat! Mr. Griz may have a mature fulsome figure, but he was a neutered male who found himself homeless. He is not best friends with his cat roomies, but Griz ignores them and is very happy with his own company. Mr. Griz's ideal home would be on the quieter side and free of little humans or immature kittens who he may find frivolous and unnecessary to live his best life!