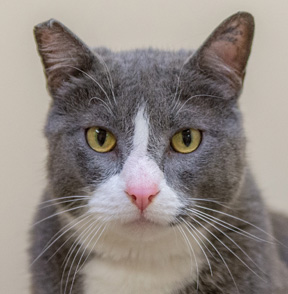 May we recommend a handsome grey and white middle aged gent? Mr. Gray could be the cat for you. With a bit of sleuthing, it seems that he originated in southern Alberta, but somehow ended up just east of Calgary on an acreage. His rescuer noticed Mr, Gray around the end of October and took him in temporarily to keep him safe. He likes to talk and is fond of chin rubs, but he does not like the dark and loud noises. Hanging out with people is one of his favourite things and his rescuer taught him to do a 'paw high five' for an occasional temptation treat. We are not sure how he would do with little humans or dogs. Who could resist this clever chap!