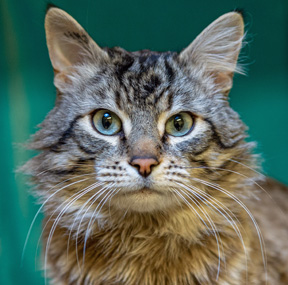 Dauntless Dalgleish! After a bit of a rough start, Dalgleish is feeling better. When he was rescued, he was so stressed that he had some wheezing which led our vet team to suspect he might have some mild asthma. Now that he has settled in, he has not had any further episodes, so we believe it was the stress of rescue.

The rescuer had noticed Dalgliesh around for over a year and was concerned because he appeared to have lost weight. He is a very handsome fellow with some probable Siamese DNA and light coloured aqua eyes. It is possible he may tolerate another quiet cat in the home, but he would probably be happiest as a single guy. Dalgleish is hoping for a fresh start in a calm relaxed home with lots of love and never ending sunbeams.